Being a professor of political science, I am often asked to offer my opinion on political events. I like to talk about politics, but I am even more interested in listening to the opinions of others. I often encounter people who express disgust for one or several aspects of our political system. One of the most common targets for their scorn is related, one way or another, to political parties. In this post, I offer my defense for that often loathsome yet necessary U.S. political institution we love to hate: the political party. More specifically, in this piece, I will explain the important roles parties play in our system of government.

A political party is an organization comprised of people seeking the ability to govern. To govern, parties win elections by recruiting, nominating, and campaigning on the behalf of candidates who stand a chance at winning and are thought to share the same views of the party. While political parties are not mentioned in the U.S. Constitution, they have long been at the center of our politics. Political scientists typically agree the first political party system in the United States emerged in the early 1790s with the Federalists (think Alexander Hamilton and President John Adams) and the Democratic-Republicans (think Presidents Thomas Jefferson and James Madison). And while it is hard to imagine the U.S. without them, Americans have never liked political parties. George Washington himself spent more than a couple lines of his famous Farewell Address warning against political parties. This tradition of disapproving of parties continues today as Gallup Polls regularly report approval ratings of both major parties below 50%. 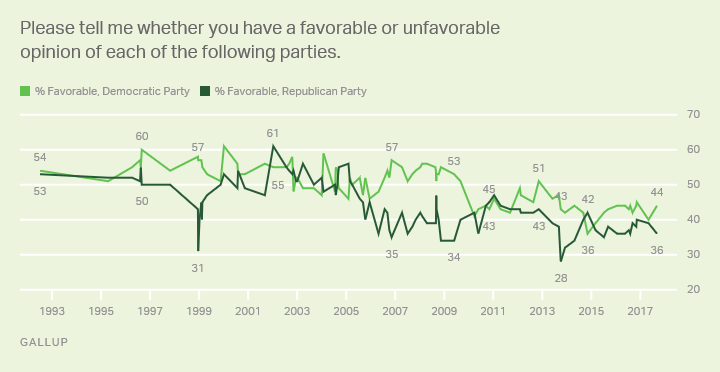 Despite our disapproval of political parties, they are a fundamental component of democracy. Governments such as our own require an active and informed electorate. We are asked to vote often to make decisions on policies and, more commonly, to elect individuals who represent us and make decisions on our behalf. Parties educate the electorate on issues and candidates—providing us with useful cues that allow us to better evaluate the actions of incumbents—those already in office—seeking re-election. Party identification provides a voter with a significant amount of information as she can better determine whether or not a candidate on her ballot holds similar views as her own.

Parties also help us organize and stabilize the government. I know, given the current state of Congress, this is where I may lose you, but the mere existence of parties are not to blame for the polarization and seeming dysfunction in D.C. (a topic for another day). Parties are needed to organize the politics of a diverse country, and they build and maintain the fragile coalitions needed in government to get stuff done. It is important to remember that a political institution, such as the U.S. Congress or our state General Assembly, is—at any one time—addressing several complex and distinctly different issues. Parties provide those in government, just like voters at the ballot, cues about who they might be able to work with, moving forward, to address issues.

Political parties inform and engage the electorate and organize our government. My goal here was not to convince you to like political parties. I am often frustrated with the name calling, obstruction, and narrow-mindedness often attributed to partisan politics. However, I hope you can appreciate political parties’ roles in our form of government. I will close with a quote from E.E. Schattschneider, who wrote nearly 80 years ago, “Political parties created democracy, and democracy is unthinkable save in terms of parties.”

John C. Davis is an associate professor of political science. His research interests include campaigns and elections, political parties, voting, Southern politics, and Arkansas politics. View all posts by naturalstatepolitics