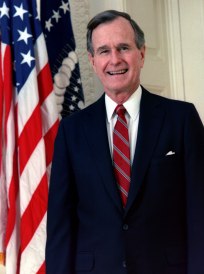 This morning, we learned of the passing of a legendary figure in our country and one of the most significant figures in the 20th Century; George H. W. Bush. President Bush answered every time the country asked him to serve as a veteran and war hero in World War II, a member of Congress, CIA Director, Vice President, and President. A family man, he remained married to his wife for 73 years, until her passing this past spring.

George H. W. Bush was a lifelong public servant and the type of political figure we seek out in our wiser moments as an electorate. While his list of accomplishments extends decades, perhaps his most significant public achievement was serving as a steady hand who steered the nation’s course during the fall of the Soviet Union. After losing his re-election bid for President to Bill Clinton in 1992, we saw a partisan politician who graciously accepted defeat as humbly as he had claimed victory. An optimistic and selfless leader, he held power reluctantly and only did so to try to do right. We need more like him. I pray that we have more like him. Thank you and rest in peace, GHWB.

John C. Davis is an assistant professor of political science. His research interests include campaigns and elections, political parties, voting, Southern politics, and Arkansas politics. View all posts by naturalstatepolitics